The college where I earned my undergraduate degree recently became a tobacco-free campus. This caused a lot of irritation among the students and faculty that smoke, because they can’t light up or dip on campus anymore.

The new campus-wide policy does allow for e-cigarettes, which are gaining popularity. They provide a smoker with nicotine but don’t have any of the nasty side effects: no second-hand smoke, no horrible smell, no cigarette butts everywhere, no ash.

E-cigs are also supposedly healthier for you, and the liquid that’s used in them comes in a variety of flavors. But say you wanted to make your own; it’s actually not that difficult at all.

The first thing you need is an e-liquid base. Acceptable bases include propylene glycol or vegetable glycerin. This base is what will create the “smoke” or “fog” from the e-cig. Fun fact: it’s the same base that’s in fog machines.

Next, you add distilled water. Make sure it’s filtered, potable water — the stuff that comes from the tap contains all kinds of elements and minerals that aren’t safe for your lungs. 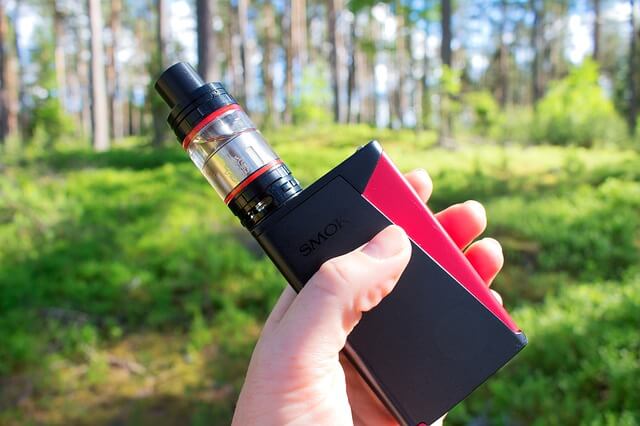 After you have the base and the water, you need flavorings. The flavors need to be food-grade and high-temperature resistant so they don’t break down inside the e-cig. Any number of flavors are available. (I’m a particular fan of cinnamon.)

After you decided what flavor you’re going to make, you might also want to consider getting what’s called “stabilizers.” These include the nicotine … which is, let’s face it, the main reason most people smoke.

One of the great things about making your own e-cig flavor is that you can decide how strong you want it to be. A general rule of thumb is to start with a mixture that is 10-20 percent flavoring to base. That means if you add ten drops of base, then you only need 1 or 2 drops of flavor.

If it’s not strong enough, then you can add more flavor. You can also add more nicotine if you like. You’ll need empty bottles to put your flavoring in, as well as syringes and eye-droppers to help move the liquid around in precise amounts. Think of it like a science experiment.

Although the fog is mostly for effect, some people like to have thicker smoke. If that’s what you’re after, use less water in the mix. It’s also important to note that if you’re using the optional stabilizers we talked about earlier, you don’t need the water.

If you’re using the water and you live in a higher-temperature area (like south Texas), you’ll need less water to produce the smoke.

You may have to go through several iterations before you find the one that works for you. For this reason, I would warn against making huge batches; stick to small amounts so that if the flavoring is off, you haven’t wasted a whole bunch of supplies.

Another disclaimer: be careful when adding the nicotine. Keep in mind that nicotine can be acutely dangerous when ingested in high concentrations. Although the e-cigs are generally safer than traditional cigarettes, nicotine is dangerous to humans in any case.

Of course, for those who feel that making your own flavoring is just too much trouble, don’t fret. There are plenty of places to buy these flavors: online, in various stores, and usually kiosks at malls or markets that provide the liquids for the e-cig.

3 Reasons You Don’t Need A Blogroll On Your Blog